We are certainly in the midst of a very strong El Niño and it is prudent for Verde Valley Emergency Service responders to be “gearing up for a big flood season.” But the historical record does not suggest any reason for unusual preparations.

The heaviest January-through-March precipitation in Cottonwood/Tuzigoot’s weather station history occurred (in order of decreasing volume) in 1993, 2005, 1980, and 1978, and not one of those years was even a moderate El Niño year by NOAA’s reckoning.

Central California residents have more cause for concern: 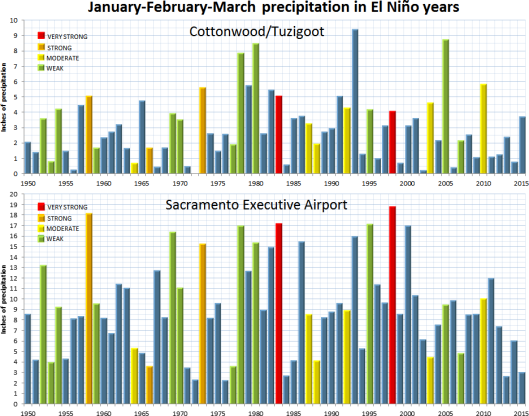 Sacramento’s precipitation record shows correlation between strong El Niños and heavy January through March precipitation. But here in the Verde Valley, where a dearth of precipitation is the norm, past weather is less often a predictor of what is to come. Here we should always keep an eye on weather forecasts and be prepared for the worst.

In addition to this VerdeViews blog, there is a website VerdeViews.com that will someday host a photo journal for the Verde Valley area. Currently it hosts three Climatic Variance pages that display temperature records for the globe, regions, nations, and individual stations in unusual formats. The project began as a study of trends in Arizona and grew into much more. I wonder if continued expansion of these pages is of interest to anyone besides me. If you are at all interested in climatic trends I would appreciate your feedback.

About that presidential candidate…